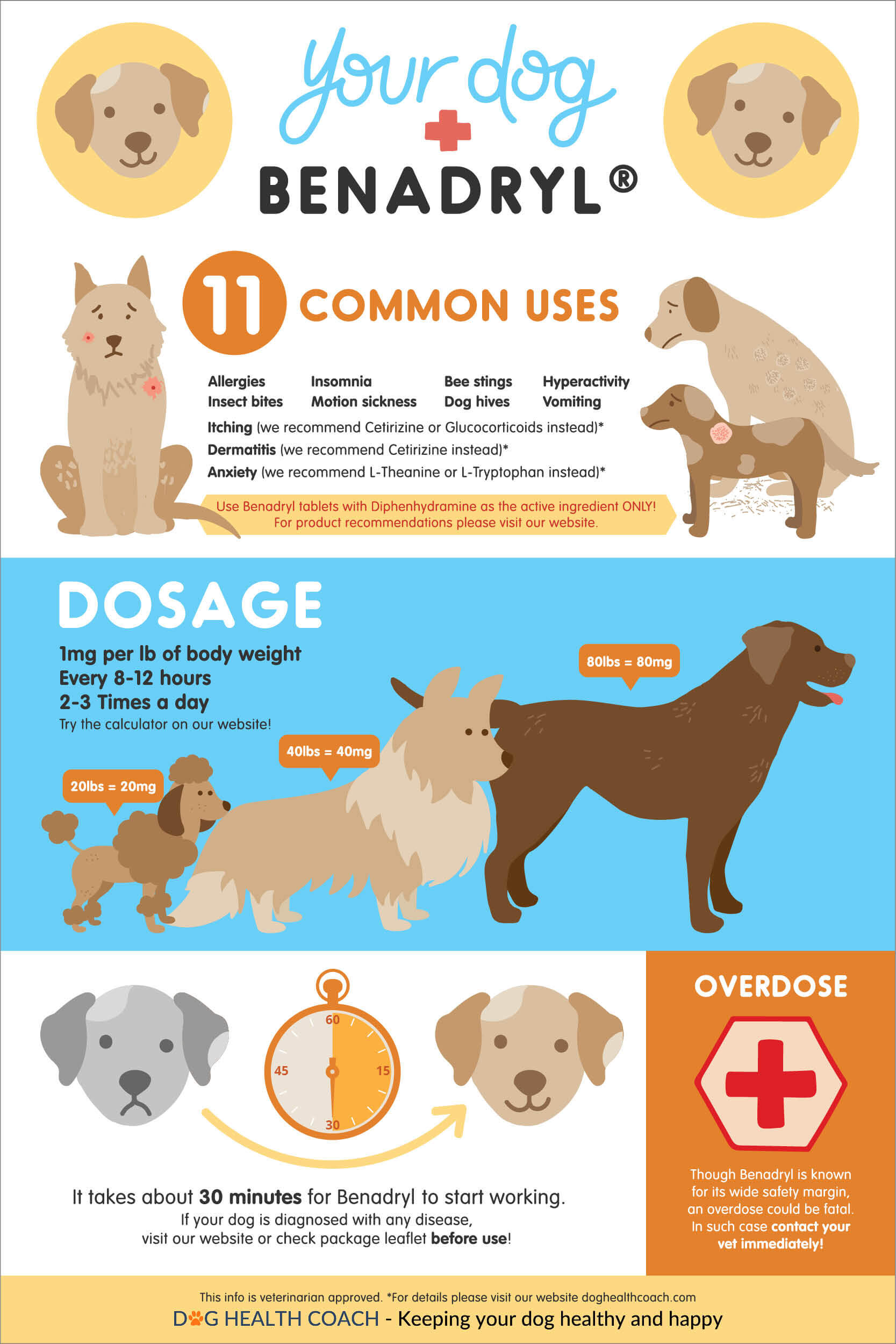 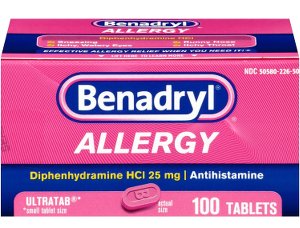 Benadryl® is an over-the-counter antihistamine that veterinarians prescribe for a variety of symptoms, including allergies and motion sickness. For treating allergic rhinitis in dogs, Allegra might be an alternative. However, pet owners should take note that Benadryl does not treat the underlying problem, which is causing the symptoms.

While it has a wide margin of safety, there are some significant things pet owners should remember before giving Benadryl to their pets.

Depending on the nature of your dog’s allergies Allegra might be an alternative.

What is Benadryl used for in dogs?

As an antihistamine, Benadryl works by blocking the H-1 receptors that abound on smooth muscle and blood vessels, and prevent histamine from attaching to these receptors. Histamine is a chemical that is released in response to allergen exposure, leading to inflammation and itching. Doing so will bring relief to watery eyes, runny nose, and other common symptoms of allergy.

A common side effect associated with diphenhydramine intake is drowsiness, which is why it is also an active ingredient in many popular drugs that help promote sleep.

Diphenhydramine (Benadryl®) is one of the many medications that are considered safe for use in animals when used correctly, although it is not yet approved by the US-FDA for use in veterinary medicine.

Common indications for Benadryl in Dogs

Benadryl is also prescribed by veterinarians for the following conditions:

If you are not sure whether Benadryl is the drug of choice for your pet’s problem, there are other options you can discuss with your veterinarian, such as Claritin and chlorpheniramine, medications which are commonly used to alleviate allergy symptoms.

Also, the effectiveness of diphenhydramine diminishes with time. Thus it is best to have several antihistamines on rotation. A few examples of antihistamines that work well for allergies include cetirizine, loratadine, and chlorpheniramine.

You could also try Dramamine® which contains dimenhydrinate, for motion sickness. The main difference between Benadryl and Dramamine® is that the latter prevents drowsiness while still providing effective nausea relief.

What Kind of Benedryl for Dogs?

There are several variants of Benadryl, but the most common one prescribed in dogs contains diphenhydramine as the active ingredient. Sometimes, vets prescribe Benadryl with cetirizine as the active ingredient to treat itching in dogs. Since only a small amount of cetirizine crosses the blood-brain barrier, there are generally fewer side effects, such as vomiting or excessive salivation; but it tends to be less effective in eliminating allergy symptoms and also, drowsiness should not occur.

You must steer clear of the following variants of Benadryl:

The typical dosage for oral Benadryl is

1 mg per pound of body weight,

which is given every 8 to 12 hours (2-3 times a day). The dose is the same for both puppies and adult dogs.

A double dose (2 mg/pound body weight) may be given as needed, such as in snakebites. 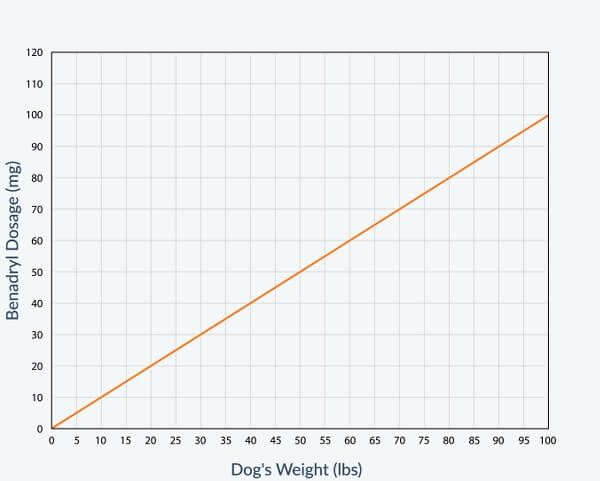 Take note that this suggested dose is for Benadryl variants that contain ONLY diphenhydramine as the active ingredients, like this one! (Click the link to buy it on Amazon).

The children’s formula of Benadryl is recommended for dogs because it contains smaller quantities of the active ingredient, which makes it easier to measure out and give the correct dose. At the standard concentration,

When delivering large amounts, it is a good idea to use a syringe when measuring out the medicine to increase the accuracy of the dose. Please note that a teaspoon is about 5ml’s and a tablespoon is about 15ml’s.

Topical Benadryl and dogs – not a good idea!

There is also a topical form of Benadryl which is available as gel, cream, spray, or stick. These formulations normally contain 1% diphenhydramine (the extra strength formula has 2%).

Dogs tend to lick off the medicine before it can take effect. Thus it is a good idea to put an E-collar on your pet or engage in some activity to keep him from licking the treated area.

Also, pet owners tend to forget that topical Benadryl contains specific active ingredients which can lead to overdose symptoms when too much is applied.

Suffice to say, giving Benadryl tablet is the better choice when it comes to preventing the potential overdose of the medicine.

Important points to keep in mind

Pet owners should always remember that applying too much medicine, even topical products, can lead to overdose. The risk increases when Benadryl tablet or liquid or other antihistamine preparations are also given simultaneously.

The dosage can differ based on several factors; your veterinarian may take into consideration your pet’s medical history, breed, and cause of symptoms before deciding how much Benadryl for a dog is given.

How long does it take for Benadryl to start working?

Generally, it takes about 30 minutes for Benadryl to start working. So, when you’re using it to treat anxiety in dogs or to prevent motion sickness, make sure to administer it 30 minutes before the fireworks display or before the trip. If there is no alleviation of symptoms after 30 minutes, you should take your pet to your veterinarian for a thorough checkup.

Side Effects of Benadryl in Dogs

Just like other types of medications, Benadryl intake may result in some side effects. Dogs that receive the medicine may behave strangely or a bit “confused.” They can also experience any of the following reactions:

Benadryl may react with these drugs:

Side Effects and Adverse Reactions

If your dog manifests serious adverse effects, such as an allergic reaction, you should seek immediate veterinary care. Typical signs of allergy that you should be on the look for include itching, sneezing, a rapid heartbeat, rashes, and difficulty breathing. Serious reactions should be treated as medical emergencies.

Though Benadryl is known for its wide safety margin, an overdose could be fatal. Cases of hospitalized dogs surviving up to 16 times greater than the recommended dose have been recorded, so if pet owners act fast enough, there is a higher chance of recovery. Don’t attempt to induce vomiting unless you have been instructed to do so by a veterinarian.

Symptoms of Benadryl overdose in dogs

Did we miss anything? How can we make this article more helpful?

This site uses Akismet to reduce spam. Learn how your comment data is processed.